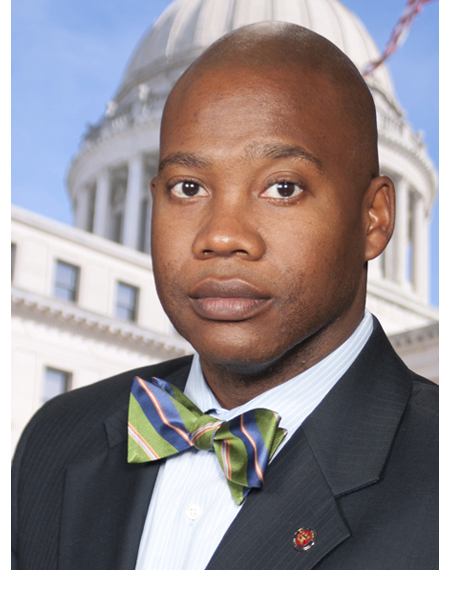 "The quality of education in Mississippi will improve with fully funded schools and well-paid teachers. Teacher pay in Mississippi is embarrassing and I will continue to fight for our teachers, our schools, and most importantly, our children."

Simmons is self-employed as the co-founder/co-owner of Simmons & Simmons, PLLC, Attorneys at Law in Greenville, Mississippi, where he is licensed to practice law in Mississippi and the District of Columbia. He is a trial lawyer, former municipal court judge, adjunct college professor and Mississippi State Senator.

While in law school, Simmons was a member of the nationally acclaimed HUSL Huver I. Brown Trial Advocacy Mock Trial Team that defeated two-time reigning champion Harvard Law School to become the first historically black law school to win the American Bar Association International Mock Trial Competition. Simmons has been featured in several publications, including Jet Magazine, Dallas Examiner, Chicago Defender, Diversity and the Bar and was congratulated in the United States House of Representatives for this honor.

Simmons returned home in 2005 to the Mississippi Delta to unselfishly give his talents and passion to serve others. In 2008, his law firm, Simmons & Simmons Attorneys-at-Law, was formed to be the voice for the voiceless, represent the misrepresented and unrepresented, and to fight for justice and equality for all. From 2009 to 2011, he served as the municipal court judge for the Town of Sunflower, Mississippi, and the municipal court judge for Moorhead, Mississippi. Simmons also served as the youngest school board member and former secretary on Greenville Public School District Board of Trustees. He has taught as an adjunct professor since 2007 at Mississippi Valley State University, where he has taught undergraduate and graduate courses in the college of professional studies.

On March 1, 2011, Simmons was elected to the Mississippi Senate. He serves as Chairman of the Enrolled Bills Committee and is a member of the following committees: Compilations, Revisions, and Publications Committee; Corrections; Finance; Insurance; Judiciary A; Judiciary B; Labor; and Wildlife, Fisheries and Parks.

As a lawyer and legislator, Simmons has received state and national recognition and awards highlighting his aggressive advocacy and dedicated public service. The National Bar Association and IMPACT named him as one of the “Nation’s Best Advocates: Top 40 Lawyers Under 40” for achieving prominence and distinction in the African American legal community, both professionally and philanthropically.

In 2012, Simmons was awarded the “Government Service Award” by the Magnolia Bar Association. In 2013, he was named by the Mississippi Association for Justice as “Legislator of the Year” for his outstanding dedication to the people of Mississippi by promoting fair and open access to the judicial system through the legislative process. In 2014, the National Juvenile Justice Network and the Southern Poverty Law Center of Mississippi presented him with the “2014 Leadership Award in Juvenile Justice Reform.”

Simmons has an innate personal commitment to give back to his community, serving as an annual sponsor of Simmons and Simmons (S&S) Little League Sluggers and the Armstrong Elementary School basketball team. He also devotes his time to participate in other community endeavors, as well as serving on corporate boards. He participates annually in his city’s campaign to “Keep Greenville Beautiful” by picking up trash with local churches and community members throughout the spring and summer months. He is a mentor of WWISCAA Youth Mentor Program, board member of United Way of Washington County, board member of Delta Center Stage; alumnus of Mississippi Economic Council’s Leadership Mississippi Class of 2009; Greenville Rotary Club; Mississippi Bar Association; Magnolia Bar Association; American Bar Association; America Association of Justice; Mississippi Association of Justice; National Bar Association, District of Columbia Bar; Beta Gamma Sigma National Honor Society; Mason; and a Life Member of Kappa Alpha Psi Fraternity, Inc.

Simmons is a member of the Greater Springfield Missionary Baptist Church in Greenville, Mississippi. He is married to CuWanda Flowers Simmons, and they have a son, Derrick, Jr. (“DJ”).